The United States experienced major cultural changes after World War II ended. An era of infrastructure development dawned in the United States; in 1956 President Eisenhower created the interstate highway system for civilian travel and military applications, widespread suburbanization occurred, and the fast food industry was created. The introduction of fast food restaurants became immensely popular among Americans, rich and poor alike. The first fast food restaurant that became an American icon was McDonald’s. Created in the 1940s by Richard and Maurice McDonald, the business aims of the restaurant were to provide cheap food for the “on the go” consumer. At the time, the carhop or drive-in restaurant was the norm. The McDonald brothers realized that it was more profitable to eliminate the carhop and sell hamburgers, cheeseburgers, and French fries from the inside of their store. A businessman by the name of Ray Kroc, an American businessman of Czech origin who joined McDonald’s in 1954, saw opportunity in expansion of the restaurant, and in 1955 he opened a McDonald’s in Illinois. Kroc was an innovator, developing technologies that maximized profit and time management. Popularity skyrocketed and in a mere 10 years 700 McDonald’s had been established throughout the United States. As of 2014, there are 32,787 McDonald’s in 121 countries (1).

McDonald’s is the largest food service corporation in the world; therefore it stimulates almost every aspect of the economy. According to BBC, “McDonald’s employs 1.9 million people” (2). The average McDonald’s franchise has 58 staff members with an average salary of $7.73 an hour (3). Therefore, the average franchise makes $2.5 million a year in revenue. McDonald’s impacts local, as well as global economies substantially.

McDonald’s has been a poster child for various environmental issues since the 1980s. It all started with the destruction of rainforests to make way for cattle ranching. McDonald’s was the center of attention for the rainforest topic because McDonald’s has always been the leader in the fast food industry. Even though McDonald’s corporate executives denied the claims of rainforest destruction, in 1989 the company committed to refuse beef sourced from recently deforested rainforest areas (4). Environmentalists also brought McDonald’s poor waste management practices to light. As a result of the negative media attention, McDonald’s became partners with the Environmental Defense Fund or EDF (4). The main goal of the EDF is waste reduction, and by 2000 their partnership with major companies resulted in a 30% reduction in waste (5). In 2010 McDonald’s was the leading contributor to the World Wildlife Fund’s first-ever global conference pertaining to sustainable beef as well as a commitment to matching 30 percent of the electricity used in company owned stores with renewable energy credits from American wind power (6,7). There is no doubt that McDonald’s is headed in a good direction, but the corporation is still universally scolded for the massive amounts of waste generated and its contribution to American obesity.

McDonald’s: Now and Then 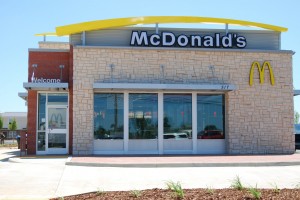 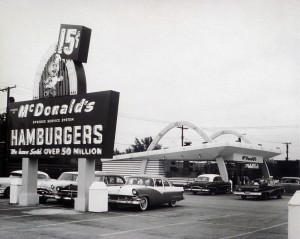 This video is property of McDonaldscorp

This Video is Property of AllTime10s