Founded in 1949 as a regional refiner of crude oil, today Warrior Asphalt Inc. produces asphalt materials used for paving and roofing.[1] Warrior Asphalt is considered one of Tuscaloosa’s “grandfather” industries, indicating that it existed when the Alabama Water Improvement Commission was first granted regulatory powers in 1949. Because of its status as an early industry, the company was not required to adhere to any regulations until a 1965 amendment by the legislature. 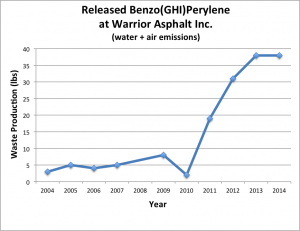 This graph displays Warrior Asphalt Inc.’s emissions of the chemical called benzo(g,h,i)perylene from 2004 to 2014, excluding data from 2008. Benzo(g,h,i)perylene belongs to a group of chemicals termed polycyclic aromatic hydrocarbons (PAHs) that can occur naturally in addition to being synthetically produced. This chemical is often used in research but its common industrial function is in the production of dyes and plastics, in addition to pesticides, explosives, and drugs. Benzo(g,h,i)perylene can commonly be found in exhaust fumes, coal, asphalt, tobacco smoke, and agricultural and industrial burning sites. At Warrior Asphalt, it is produced as a result of the oxidation process that involves heating the asphalt and blowing air through the liquid, then transferring the asphalt to tanks from which the chemicals are able to flow out into the atmosphere.[3]

The most common way this chemical is ingested is through contaminated air, especially near burn sites. It can also enter the body by way of contaminated food and water. Information regarding the individual effects of benzo(g,h,i)perylene on human health is currently limited as PAHs typically occur as complex mixtures instead of individual compounds. However, there have been studies conducted on animals using mixtures and other individual PAHs similar to benzo(g,h,i)perylene that provided alarming results. Tumors as well as birth defects were observed in mice that breathed contaminated air, ate contaminated food, or had skin contact with PAHs. Researchers also observed damage to skin and immune system as well as reproductive health.[4] The Department of Health and Human Services has identified several PAHs as human carcinogens but does not have enough information to classify benzo(g,h,i)perylene as such.[5]

As seen on the graph, Warrior Asphalt’s release of benzo(g,h,i)perylene has been rising dramatically in recent years. From 2004-2007, the annual release of the chemical averaged about 4 pounds. In the past two years however, release has averaged over 35 pounds per year. While this does not surpass the EPA threshold, it is concerning when viewed in light of the various studies conducted on animals and the chemical’s association with other PAHs that could be more dangerous. Also worth noting is the fact that none of the benzo(g,h,i)perylene released by the company was recycled or treated.[6]