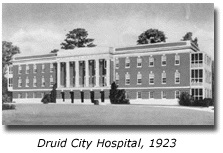 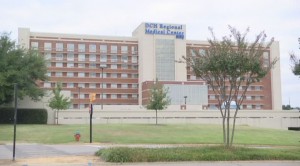 As the city of Tuscaloosa grew, especially with the exponential enrollment at the University of Alabama, throughout the early 1900s, it became evident that a larger medical center would soon be needed. In 1916 the city of Tuscaloosa had a 12-bed clinic named the Druid City Infirmary, after an old nickname for the city of Tuscaloosa. This operation was located on Broad Street, later to be known as University Boulevard, where the current Druid City Hospital stands. On March 25, 1923 a new hospital opened for the city of Tuscaloosa at the site of the current University of Alabama Russell Student Health Center (5).  The land was donated by then University President Denny, in an attempt to provide better health care for not only the citizens of Tuscaloosa, but also the growing University student population (5). In 1946, with pressing need for an even larger facility, the hospital board was forced to publicize in order to meet funding requirements. In December of 1952, the newest hospital structured opened at 809 University Boulevard East, where it stands today (5). This new location would aid seven counties, a population of over 220,000 people. With the addition of a five story wing in 1976, the hospital became the third largest in the state of Alabama, and again could meet the requirements of the growing city and county.  During the 1980s, Druid City Hospital Regional Medical Center became the cornerstone of a new DCH Health Systems when Fayette Medical Center was incorporated (5). In the 1990s, Northport Medical Center was incorporated into the DCH Health Systems, making the system the main health care network for all of West Alabama (3).

The economic impact of Druid City Hospital for the city of Tuscaloosa has been astounding. As the city increased in size, so too did the hospital; meaning that more jobs were required to keep the facility functional. As of 2012, DCH Regional Medical Center employed 3,461 of Tuscaloosa’s 93, 683 citizens 7). That makes DCH Regional the second largest employer in the city of Tuscaloosa, second only to the University of Alabama (6). Secondary to being a non-profit hospital as it is part of the public domain, all excess revenue acquired by DCH Regional is used for employee benefits, additions of new technology and, most importantly for the economic stability to Tuscaloosa, increasing the competitiveness of salaries for DCH employees(3).

Environmentally, the impact of DCH Regional has not been nearly as positive. Due to being a leading medical facility, there is a significant amount of medical waste and general waste produced by the huge hospital yearly. DCH has made strides to decrease its carbon footprint in the last several years by replacing all 1,100 disposable sharps containers with reusable containers (4). Per a DCH News Release: “According to Stericycle’s carbon footprint estimator tool, the Regional Medical Center diverted 38,421 pounds of carbon dioxide from 64,753 pounds of plastic and 5,002 pounds of cardboard not going to the landfill in 2009. (7)” This, along with the implementation of “green teams” who search for more sustainable methods of providing health care, have decreased the negative impact of DCH on the city of Tuscaloosa and surrounding counties. Despite the changes being made, there are many more environmental aspects that the DCH Health Systems could be incorporating, including recycling high percentages of construction materials, eliminating use of severely toxic chemicals and reprocessing single-use devices. According to the American College of Physicians, their program, the Healthier Hospitals Initiative, has been implementing the three aforementioned changes in over 700 hospitals since 2013(1). Not only would these changes make the hospital more profitable, but they would improve the general well-being of the population surrounding the hospitals.