Hunt Oil Company created the first commercial oil well in Alabama after the discovery of oil in Choctaw County, Ala. in 1944. Hunt Oil chose Tuscaloosa to house the oil refinery because of the easy access to roads, railroads, and the Black Warrior River.  Hunt Oil Refinery was finished in 1946 with a 3,500 barrel per day refinery capacity (1). In 1984, a 25-mile pipeline was built to connect Tuscaloosa to the Colonial Pipeline. The Colonial Pipeline runs from the Texas Gulf Coast to New Jersey, connecting the Tuscaloosa refinery to the East Coast (2). Hunt Refining Co. has gone through several multimillion-dollar expansion projects and several different acquisitions. Hunt Refining Co. bought two more refining plants in 2003 from Southerland Oil Company in Sandersville Miss. and Lumberton, Miss. (3). As of 2010, the daily capacity of the refinery in Tuscaloosa was 72,000 barrels per day (4). The United States consumed 18.89 million barrels of oil a day in 2013 (5). 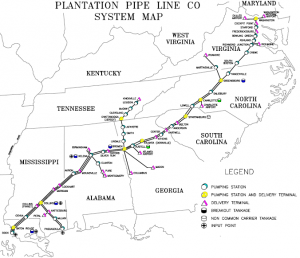 The economic reach of Hunt Refining Co. is extensive. They serve much of the South East and recently went international. They produce diesel, gas, and asphalt. Asphalt is distilled from crude oil and then treated with various gases (6). In September 2012, Hunt Refining Co. approved of a $11 million expansion to create 11 new permanent jobs and bring in new equipment (7). The Tuscaloosa facility encompasses 71,790 square feet and has 200 employees (8). The current president of Hunt Refining Co. is Shanmuk Sharma. Sharma became a part of Hunt Oil Co. in 2005 and became President of Hunt Refining Co. in 2010 (9,10). Previously he worked for Kellogg Brown & Root for 30 years as a project director and for LNG working on projects around the world (11). Hunt Refining Co. supplies jet fuel to the regional U.S. Department of Defense and in 2013 received a $65.31 million federal contract with Defense Logistics Agency Energy for jet fuel (12).

Hunt Refining Company’s mission statement is as follows: “The mission of Hunt Refining Company is to be a growth oriented industry leader, respected for the competency of its people, the effectiveness of its operations, quality of its products and its long history of social and environmental responsibility” (13). The inclusion of environmental responsibility points to a conscious effort to reduce their environmental footprint. Hunt Refining Co. is in region 4 for the EPA. They have permits for the Clean Air Act, Clean Water Act, Resource Conservation and Recovery Act (14). Between 2004 and 2012, overall Toxic Release Inventory (TRI) has gone down significantly, from 84,686 lbs of air pollution in 2004 to 31,215 lbs of air pollution in 2012 (15). TRI’s include Ammonia, Methanol, and Xylene – a full list can be found on the EPA website (16). Between 2008 and 2009, Hunt Oil Co. cut their emissions by over half from 88,380 to 33,879 lbs of TRI air pollution per year (17). These air pollution reductions are due to a violation of the Clean Air Act that resulted in a settlement in 2007 that required Hunt Oil Co. to pay a $400,000 fine (18). They were also required to invest $48.5 million on new and upgraded pollution controls at all three refinery’s (19).

On June 17, 2013, Hunt Refining Co. experienced an oil spill into the Black Warrior River. An estimated 146 gallons of oil water spilled into the river (20). The spill was the result of a valve that wasn’t working properly that diverted oily, runoff water into the river instead of to their water treatment facility (21). Several government agencies, including the EPA and Alabama Department of Environmental Management, approved the cleanup measures (22). While Hunt Refining Co. got the green light from the government agencies, a local Tuscaloosa organization called the Black Warrior Riverkeeper argued that it was not sufficient enough (23). A local member noticed a visible rainbow oil sheen on the banks of the river after the cleanup was confirmed done, which is a violation of the Clean Water Act (24). He also noted that the oil-absorbent booms that the crew were using to clean up the spill appeared saturated and no longer functioning properly (25). That said, Hunt Refining Co. very quickly worked with the proper government agencies and got the spill cleaned up within 36 hours of being informed about the oil spill.

Overall, Hunt Refining Co. seems to be trying to stick to their mission statement and controlling their environmental footprint. While numbers fluctuate year to year, their overall trend seems to be going downward. Given the industry that they work in, their dedication to lowering emissions, with and without government regulation, is commendable. 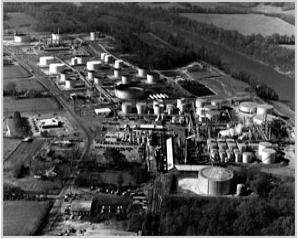 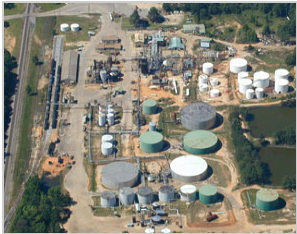