Manna: “any sudden or unexpected help, advantage, or aid to success” (1). In this case, success refers to a healthy lifestyle, which the Drennen family hopes to promote in Tuscaloosa. Frances Self and Earle Drennen brought Manna Grocery and Deli to Tuscaloosa, Alabama, in 1980. For the past 34 years, Manna has been providing the Tuscaloosa area with a bevy of “natural, organic, ethnic, and gourmet groceries” (2).  Natural, healthy foods have historically been hard to come by in West Alabama. Today, in addition to small selections of organic, whole foods in grocery store chains, stores and restaurants such as Robertson’s Natural Healing Herb Store, Natural Pharma, and Epiphany provide healthy and locally sourced products to area citizens, too. However, Manna Grocery and Deli has lead the way in providing Tuscaloosa area residents with the knowledge and goods to support a healthy lifestyle since 1980. Manna Grocery and Deli has played a wonderful role for Tuscaloosa. Manna has kept pace as organic and specialty health foods have grown in popularity. As of 2013, 81% of parents in the United States report that they purchase organic foods (3). According to the United States Department of Agriculture (USDA), U.S. organic food sales rose from around $12 billion to $28 billion between 2004 and 2012 (4). This two-fold increase has also accompanied a steady rise in enrollment at the University of Alabama. Data from the university’s Office of Institutional Research and Assessment indicates stunning growth as enrollment has increased from 25,580 students in 2007 to 36,155 students in 2014 (5).

Providing a growing number of health conscious students and residents with options that are typically found in your larger, chain health food stores (which Tuscaloosa will lack until the completion of Tuscaloosa’s first Fresh Market store in Summer 2015) has been a role Manna has happily and successfully filled. The Crimson White’s Katherine Owen wrote an article in 2012 in response to the lack of natural health stores in the Tuscaloosa area, and quoted co-owner Frances Self Drennen as saying that “much of the store’s customer base comes from the University community” (6). Manna Grocery and Deli has and continues to play a large role in the health and happiness of the University’s students.

Now, many of Manna’s health products are produced outside of the area and are typically shipped long distances to reach shelves in Tuscaloosa. However, as a local business, Manna Grocery and Deli’s practices reveal a dedication towards supporting a sustainable environment, as well as local farmers and the community. The Drennen’s first opened shop on University Boulevard near the University of Alabama campus “but moved locations due to limited space and restricted access” (7). The move to a larger location on McFarland Boulevard allowed the Drennen’s, and their newly named Manna Grocery and Deli, to effectively supply customers with the goods and services they desired. The added space also allowed Manna Grocery and Deli to start and operate their popular deli under the same roof as their grocery items, negating the need for multiple locations. 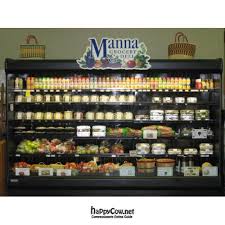 Additionally, Manna provides numerous locally produced products. Customers can buy goat cheese from the small town of Elkmont, Alabama, as well as milk from Alexandria, Alabama, at Manna Grocery and Deli. Through a Community Supported Agriculture (CSA) partnership with Snow’s Bend Farm, consumers can pick up deliveries of fresh produce at Manna Grocery and Deli provided by Snow’s Bend (8). Moreover, much of the food prepared in-house for Manna’s hungry customers comes from Snow’s Bend Farm in nearby Coker, AL (7). Manna’s dedication to locally produced products only further strengthens their reputation as a responsible health foods store.

Surprisingly, though, Manna Grocery and Deli’s support of local business and products does not stop there. Manna Grocery and Deli also supports Tuscaloosa-area businesses by participating in the 3/50 Project (9). This project encourages consumers to spend fifty dollars at three local “brick and mortar” stores each month. Manna’s support and involvement with the project aids and encourages economic growth in Tuscaloosa.

Manna Grocery and Deli stands as one of Tuscaloosa’s most reliable small businesses, and is unlikely to leave the community any time soon. So, whether you long for a warm meal or a cool glass of fresh milk, your cravings can surely be fed at Manna’s Grocery and Deli, a staple in the Tuscaloosa community since 1980.