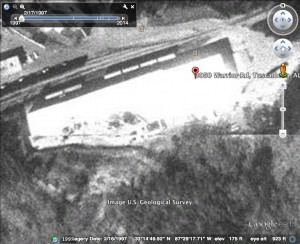 This is Warrior Roofing on February 16, 1997. Credit: Google Earth

This is Warrior Roofing present day as of November 19, 2014. Credit: Google Images

Black Warrior Asphalt Company provides much of the synthetic asphalt materials Warrior Roofing uses to make its products. The use of the asphalt coating is a very hazardous process because of all the fumes being released from the making of the shingles and the rolls of coating. Though most of the fumes are more harmful at the time of production, the shingles and rolls yield toxic fumes and byproducts. Some of the smaller toxins include benzene, diisocyanates, manganese and manganese compounds, trimethylbenzene, chlorine, but the main problem is polycyclic aromatic compounds (PACs) also referred to as polycyclic aromatic hydrocarbons (PAHs). Incomplete combustion of organic compounds produces PAC hydrocarbons that are found in coal tar, gas, diesel exhaust and wood smoke. These are all used in many industries, including steel. Studies have shown that exposure to PAHs or PACs emissions have increased the chance of lung and urinary cancer in the workers around it. PAC and PAH are considered a human carcinogen. With the knowledge of this having these in the air is hazardous for all of the workers and any school in the area.

There are five schools in the Tuscaloosa area that are most affected by PACs and PAHs, and they are all in the 4th percentile of businesses that are polluting our area. They are: Westlawn Middle School (toxicity of 46% overall of just PAC/ PAH); Oakdale Primary School (38 percent overall toxicity); Martin Luther King Jr. Elementary School and Stillman Heights Elementary School (both with 33 percent toxicity rating); and Night High School (17% overall toxicity) (2). With what this shows this looks like it will be causing a major effect on the environment around it along with other schools and facilities in the area. From last year alone the release of chemicals dropped from about 2,500 pounds released in 2005 to just maybe above 500 pounds of chemicals released into the air to 2013 (3).