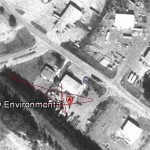 restaurants on the Strip to apartment complexes throughout the city. Rumsey Environmental came to Tuscaloosa in 2003 as a commercial and residential waste removal business providing dumpsters, containers and storage units. It has since expanded into the portable toilet and industrial recycling markets. The company began in an earlier incarnation in 1987 as Tuscaloosa Waste Removal, when Steven Rumsey surveyed local businesses about their satisfaction with their trash service. The majority of the 300 were not because of a proposed price hike by national waste-removal business Waste Management. This may have been attributed to high fossil fuel and the use of incinerators. According to the Tuscaloosa News, Steven Rumsey, founder and president, saw an opportunity and wanted Tuscaloosa County to maintain a local presence in waste removal (1).

Rumsey hauling a dumpster away.

The company made $1.74 million in 2004, and has since doubled its revenue, making $4.83 million in 2013, according to referenceUSA. That’s nearly half of what the city of Tuscaloosa spent on environmental services ($9.4 million) in 2013, according to the Comprehensive Annual Financial Report (2). The company maintains 25 employees and recently sold its solid waste collection holdings to Houston-based Waste Connections (3).

According to the US census Bureau, Tuscaloosa has 95,000 residents, an increase of 3.2% since 2010 (4). This is due to ever-increasing enrollment at the University of Alabama, which was over 36,000 in 2014 (5). To meet demand, building contractors are planning to build 3,620 apartment beds by 2015, even though data suggests a decline in occupancy rates from 97 percent to nearly 91 percent in apartments on the south side of the city (6). Fortunately, the Student Housing Task Force was established in 2013 to curb this. The promise of new construction may bring revenue, but it also brings industrial and commercial waste issues.  Wood, a primary construction material, accounts for 13 million tons of waste received at landfills every year, according to a 2012 EPA report (7). With a construction boom on the horizon, Tuscaloosa’s industrial landfills are looking to expand, as in Holt, from taking in 1,000 cubic yards of waste to 3,000 (9).

Commercially, more apartments mean more dumpsters, which may mean more revenue. While Rumsey determines the amount of dumpsters needed at each site by estimating the amount of trash collected per bedroom, ultimately the client decides on services needed.  Due to the magnitude of apartment construction, developers look to maximize profits while keeping costs low. For future Tuscaloosa residents, this could mean sacrificing dumpster pickup to cut down on labor costs or overall size of your dumpster (10). A task force has been made to curb the overflow of apartments, one could soon do the same for garbage.  For example, according to company estimation, 500-bedroom apartments accrue 3 cubic yards of waste per week, which is equivalent to 35 to 40 30-gallon bags of trash. The Avenue at Tuscaloosa utilizes 10 6-yard dumpsters which holds 12,000 gallons of trash per week. By this estimation, nearly 4.6 million gallons of new waste would fill Rumsey 6- yd dumpsters next year. At the moment, The question is not whether Rumsey can hold its own, but a matter of how much developers are willing to pay.

According to an EPA report, Americans generated 251 million tons of solid waste in 2012, with food accounting for 14.5 percent, while recycling only 2 percent. This is a concerning trend that’s nearly tripled since 1960. This is a sizeable amount of material that could be turned into nutrient-rich soil. Luckily, people are also recycling and composting more, saving 87 and 21 million tons of waste in 2012, respectively. According to a 2012 Alabama Department of Environmental Management report, Tuscaloosa has received almost $400,000 in grant money since 2011 by the Alabama Recycling Fund to aid in these efforts. The University turned 201 thousand tons of food into compost for the surrounding community in 2013. Thus reducing the volume in Coker’s Black Warrior Solid Waste facility.  The call for a greener society has allowed for various composting programs around Europe, leading San Francisco to enact mandatory laws.