In 1937, John Herman Hickman agreed to raise seventy-five chicks for his brother-in-law. He went door to door selling the chickens in Gordo, Alabama. After being successful from door to door selling, Hickman thought of having farmers raise the chickens for him, thereby allowing him to focus on distributing the chickens to vendors. After three decades of success, and with the merging of Harris Poultry and Egg Company into Hickman’s operation in 1967, the corporate office and processing plant of PECO Foods Incorporated opened in Tuscaloosa, Alabama, in 1970. Since then, PECO has become the eighth largest poultry producer in the United States.[1]

In Tuscaloosa, PECO employs thirty people at their downtown Tuscaloosa location, and a total of one thousand corporate employees across the United States. According to data available for US businesses on Referenceusa.com, in 2013, PECO had a sales volume of $4,689,000 just at their Tuscaloosa poultry processing plant and downtown corporate location.[2] The Tuscaloosa location is PECO’s first ever location. This branch was the stepping-stone to the succession and expansion of PECO in the American Southeast. PECO just recently announced the opening of a new plant in Batesville, Arkansas that will allow the town of Batesville to grow economically and provide one thousand new jobs for the unemployed as discussed by CEO and president, Mark Hickman, in the video shared below.[3]

Historically and presently, PECO has had its fair share of water pollutants. In the EPA’s DMR (Discharge Monitoring Report) the amount of pollutants that PECO releases per year is as follows; “Solids, total suspended (water pollution) are 57,335 lbs/yr, BOD, 5-day, 20 deg. C (organic water pollution) are 4,457 lbs/yr, Total Kjeldahl Nitrogen is 484 lbs/yr, and Phosphorus is 299 lbs/yr.” PECO Foods Inc. has also had ammonia pollution problems; in 2011 according to EPA’s Envirofacts, 2,116 lbs. were released. PECO’s water source in Tuscaloosa is Cribbs Mill Creek, according to ECHO (Enforcement and Compliance History Online), and these forms of various wastes that are being distributed into the water can be harmful. Ammonia is a colorless gas with a pungent smell that is commonly used in household cleaners, and excess amounts of phosphorus and nitrogen in water is harmful to the waters plant life and animal life. Surrounding this poultry processing plant there are 20,615 households, so these water pollutants may be harming the water that these families use in their everyday lives.[4] 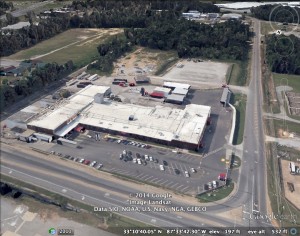 This image from Google Earth was taken in 2010, and presently depicts the poultry processing plant of PECO Foods Incorporated. 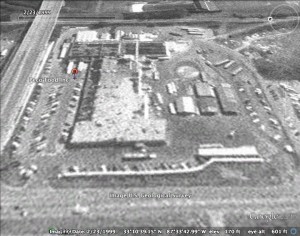 This image from Google Earth was taken in 1999 of PECO Food Inc.’s processing plant in Tuscaloosa, Alabama.