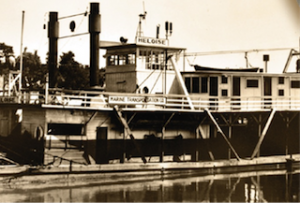 Parker Towing is a commodities transportation company located in Tuscaloosa, Alabama, that transports supplies up and down the Warrior-Tombigbee River. In 1933, Tim Parker joined the barge industry as a deckhand during the Great Depression, this deckhand job provided him with a daily wage of one dollar. Three years after working for Valley Barge Lines, Tim earned his license to captain his own vessel. In 1940, Tim bought “Heloise”, a stern wheel steamboat. His first contract came soon after, DeBardelaben Coal, who hired him to transport coal from the Coyle mines to DeBardlaben’s plant in Holt, Alabama. He decided that he wanted to orchestrate a family company and his wife, Thelma, became the bookkeeper. Tim purchased a diesel powered towboat and moved the company offices to Tuscaloosa, Alabama in 1946 . Parker Towing now has the largest barge lines in the southeast with a fleet of towboats ranging from 1000-4200 horsepower (2).

There is only one reported accident throughout the history of Parker Towing. On May 13, 2009, a deckhand named Thomas Lindley went on a smoke break while aboard the vessel and fell off the side. He was unfortunately not wearing a life preserver and drown in the 40 foot deep Black Warrior. His body was found 8 days later. “Deckhands are required to wear life vest at all times on the barges but not on the towboat” says Tim Parker. The company and marine police of Tuscaloosa, Alabama searched the towboat for any flaws in the chain link safety railing as well as the support railings. There were none accounted for. Charles Haun, the president of Parker Towing, reports that it had previously rained on the day that Mr. Lindley went missing but the decks were dry. Parker and Haun say that safety is a number one issue in this business and now employees are required to wear life vest as well as take the time to go over safety courses and emergency procedures. This shows that not only is Parker Towing environmentally conscious, is also shows that they are dedicated to the safety of its employees. Parker Towing is also certified members of the American Waterways Operators: Responsible Carrier Program (3).

Parker Towing has the largest barge lines in the southeast. They have a fleet of towboats and 350 open and closed hopper barges (barges that move materials such as sand, rocks, soil and rubbish for use of land reclaiming in lakes and oceans) providing dry cargo transportation (2). Along with the major commodities of coal, iron, and steel, Parker Towing also ships aggregates, forest products, grain products, and finished cement. Tim Parker states that his company employs over 200 people. The estimated revenues for Parker Towing are about $1,200,000 yearly. The barge and towing business is low cost and environmentally a safe way to transport freight, create jobs, and protect existing jobs.