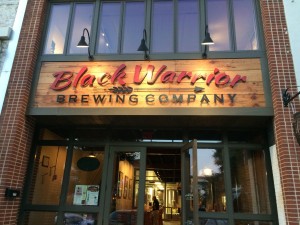 Black Warrior Brewing Company is a Tuscaloosa community staple of craft brewing in Alabama. The warm and soothing ambience combined with a rugged yet simple restaurant character compliment the potent while still smooth flavor of their house crafted brews. Roughly five years ago in 2008, current owners and partners decided to hone their home brewing master craft and fashion a brewery in the heart of downtown Tuscaloosa. The passion these friends exuded has translated into their homey brewpub they share with their peers and other members of the Tuscaloosa community. 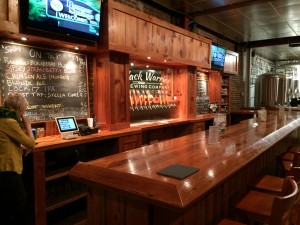 Upon asking one of the owners of their corporate environmental impact, he explained to me the brewery recycle a portion of the water used during the brewing process and that it recycle chemicals used in sterilization too.  Furthermore, the majority of the wood used in the layout of the brewpub’s bar, tables, and overall décor was reclaimed and recycled.  Also the brick used in the structure was reclaimed from tornado damage from around the town, giving the bar a truly communal aura.  Located in a building constructed in 1953, the owners were moved to use gas and steam versus a direct fire heating system when operating the stills during the fermenting process.  Having a gas/steam heating system allows for easier temperature control during fermenting, thereby allowing the brewing process to run more efficiently with less waste of water, grains, and time in between.  While this method is more expensive upfront, but it is cost effective in the long run with proven longevity along with a less hazardous environmental impact compared to using coal or firewood as a heating source.  Additional grain left over during the brewing procedure is reused by a farmer in Sylacauga who gives it to his livestock for sustenance.  Two local businesses, Left Hand Soap Company and Hammered Horses and Hounds, also use the recycled grain for their respective products and sell their merchandise at the brewery’s bar. 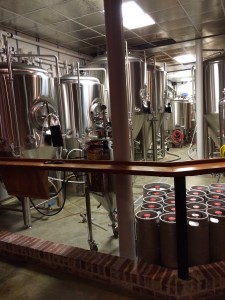 The collection of stills and kegs used during the brew process 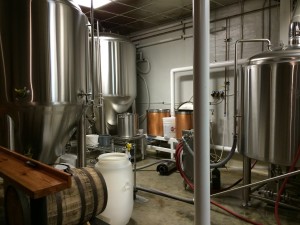 Another view of the stills used during the brew process