Target Corporation was founded in Minneapolis as Dayton Dry Goods in 1902. The first Target retail store opened in 1962, and now there are more than 2,000 Target stores in the United States and Canada. Target operates as a discount retailer, selling clothes, toys, home goods, and electronics. Some stores also contain a full grocery department and a pharmacy (2). The store in Tuscaloosa opened on March 2002. This was during an expansion of the Target brand into the Southern states (1).

The local Target employs around 250 people and generates $20 million to $50 million per year. It competes with local grocery stores as well as with other box stores, such as Wal-Mart. It also participates in community events and other philanthropic events. It offers recycling for paper and plastic products as well as electronics (1).

As a large corporation, Target has a large environmental impact, though it does make an effort to minimize this impact. Along with its regular products, Target offers a line of store brand organic products along with national organic lines. Target also self-reports on its environmental impact and releases a corporate sustainability report annually. A main point of emphasis in recent years has been reducing the amount of packaging materials in its store brand products. For example, the company has reduced packaging on online orders by 89 percent, and plans to ship 50,000 pounds fewer of cardboard per year between 2008 and 2013 (3). The reduction of carbon emissions has been a major focal point as well. Reducing the amount of miles delivery trucks have to drive and the reduction of load sizes have helped achieve this goal. Target reduced the amount of loads trucks carried by 95,000 been 2008 and 2013 (3).

Target began a push for LEED certification in 2007. It achieved a 100 percent certification level in their stores in Canada, and is making progress in the United States, especially in California. Some stores use primarily solar power, and all participate in a garment hanger reuse program, which keeps millions of pounds of metal and plastic out of landfills. In 2007 alone, the program kept 434 million hangers out of landfills. It has also pushed to remove PVC products from its shelves to protect consumers (3).

Target’s environmental track record has not always been stellar. A suit was brought up against the company in California in 2009 for allegedly dumping high levels of toxic waste into local landfills. Another incident occurred nationally when it was discovered Target knowingly bought and sold toys that contained high levels of lead between May 2006 and August 2007. The company paid a civil settlement on October 1, 2009 as a result (2). 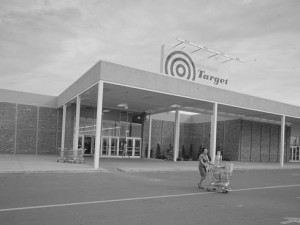